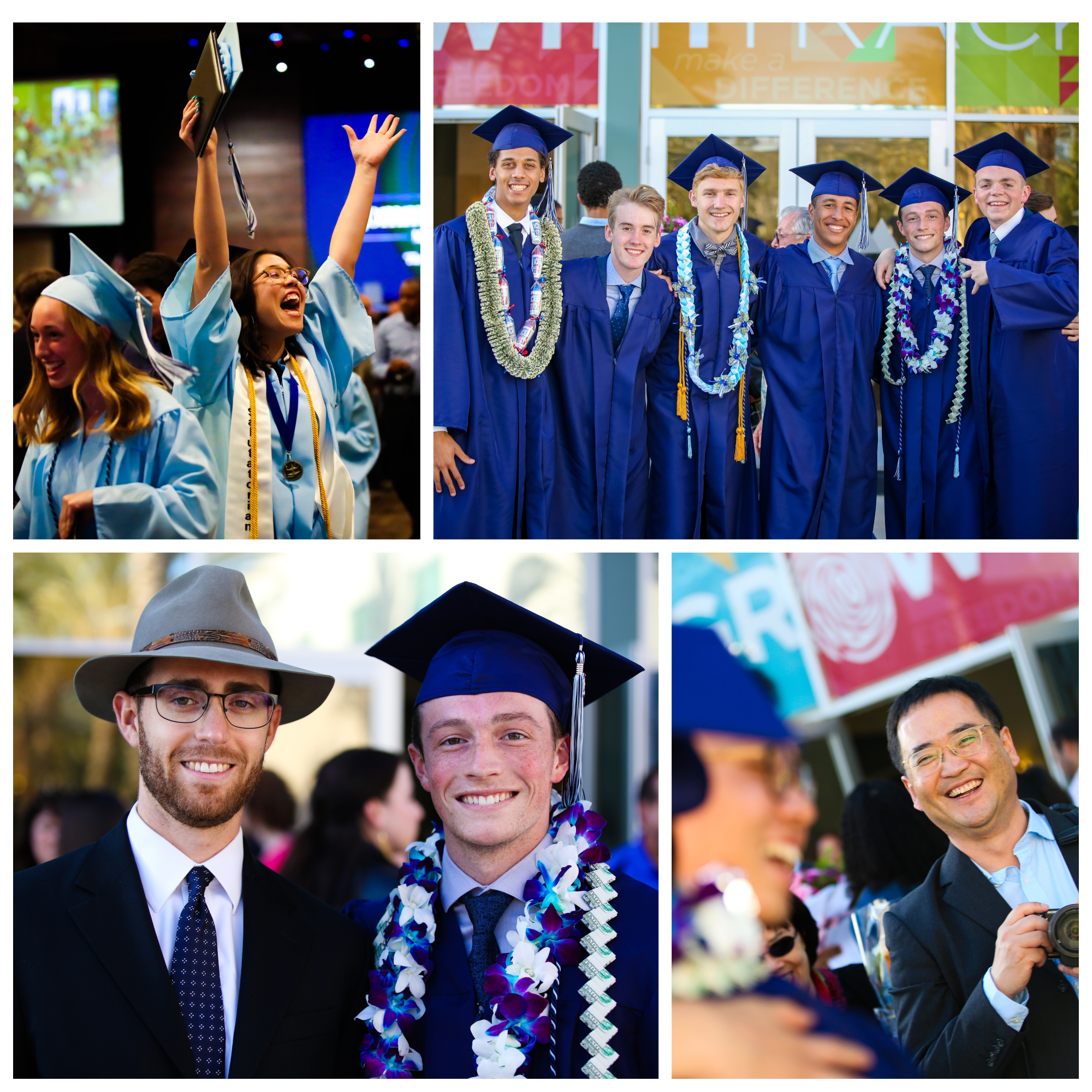 Maranatha Christian High School said goodbye to 79 of its students as the Class of 2018 graduated in a joyous ceremony on Friday, May 25. The commencement ceremony was held in Maranatha Chapel's sanctuary in 4S Ranch. Maranatha celebrated its largest graduating class in school history, which has almost doubled since last year. An impressive 100% of the students who applied for college were accepted by a broad range of universities including UC Davis, Purdue, Pepperdine, Baylor, UC San Diego, Northwestern, Cal Baptist, and the University of San Diego. Superintendent Jess Hetherington served as the Master of Ceremony and the commencement message was delivered by Pastor Ray Bentley of Maranatha Chapel. Among the students recognized were class Valedictorian Amanda Gwaltney and Salutatorian Anna Azeka. Amanda received an academic scholarship to Roanoke, Virginia where she will study Criminal Justice, and Anna received an academic scholarship to Rhode Island where she will study Marine Biology.

In lieu of a Grad Night celebration, Maranatha continued its longstanding tradition of 'Senior Week,' which is geared toward celebrating the individual. Often an emotional and poignant experience, Senior Week gives the students one last chance to solidify their relationships before they go off to college, "We are small enough to build relationships but big enough to do something impactful, such as community service projects during graduation week," said Autumn Gray, Student Life Coordinator. Senior Week began with a service project to beautify the school campus, followed by trips to Disneyland and Magic Mountain. The final service project involved painting and cleaning at Reins Ranch, a therapeutic riding program in Fallbrook.

After launching its High School Program just 11 years ago, Maranatha has rapidly expanded from 38 students in 2006 to 281 today. MCS' graduates now cover the nation, from the southernmost corners of California to the farthest reaches in northeast Maine. Graduates also attend international universities in Scotland, Tokyo, and Hungary. MCS students are gaining a presence in our nation and around the world, fulfilling the vision of its founder, Pastor Ray Bentley and the school mission: Transformed lives...transforming the world.  -Kathy Wall 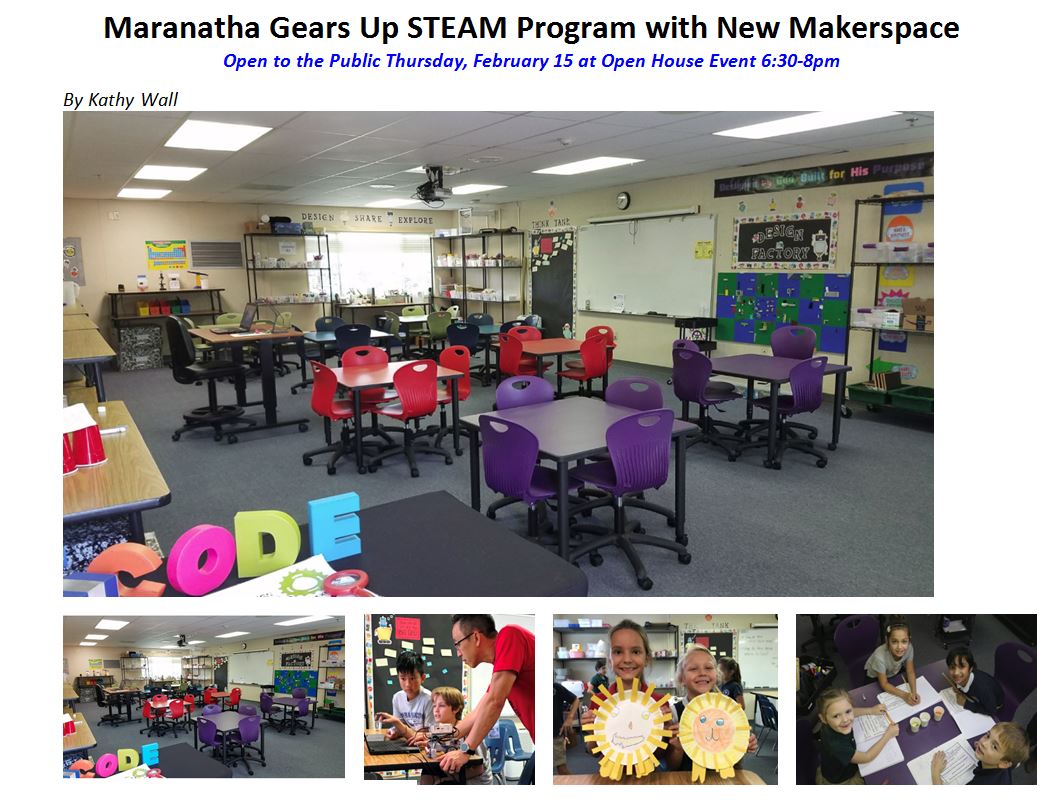 The Makery ® is the first dedicated Elementary (K-5) Science classroom in MCS history. MCS will be opening the makerspace to the public during its annual Open House and Info Night event.

Maranatha Christian Schools will be welcoming the community to come to its campus to learn more about its overall educational program with a STEAM emphasis. In addition to an Elementary Open House, the event will include a Junior High and High School Info Night.

At the event, MCS will be opening its doors for the public to see its new Elementary science classroom, The Makery,® which opened at the start of the new school year in September of 2017. The makerspace is one of the many projects that resulted from a strategic plan to re-evaluate the school’s mission in 2014. Since the launch of the plan, MCS has been committed to enhancing the sciences across all divisions.

The plan included a vision that emphasized building a college preparatory program, which resulted in MCS adding more emphasis to its STEAM curriculum and programs. MCS parents, many of whom are in STEAM-related fields, actively participated in the strategic planning process. They enthusiastically supported the goal of growing the STEAM program schoolwide. STEM is a burgeoning field – STEM job growth in the past 10 years is 3 times that of any other field, and by this year, it is estimated that 2.4 million STEM jobs will go unfilled.

MCS’ STEAM program starts in Preschool and builds into Elementary in order to give students a foundation that will spark student interest and build their confidence in the sciences throughout K-12 education – so the idea to add a makerspace was a ‘home run’ for the science-focused school. “Children are naturally curious, creative and like to figure out how things work. When given a fun classroom full of stuff to build with, glue together, draw and measure – student learning and enthusiasm takes off,” said MCS Elementary Principal, Mary Cook.

Before last year, Maranatha Christian had never won a San Diego Section championship in any sport.

This fall, Maranatha Christian repeated as Division IV champ and followed that with a Southern California Division V title and Friday night clinched the state Division V crown with a 25-23, 25-10, 25-20 victory over Novato San Marin at Santiago Canyon College.

“This is all kind of unbelievable,” Maranatha coach Mary Beiler said. “(But) I kind of had a belief that this would happen after last season. 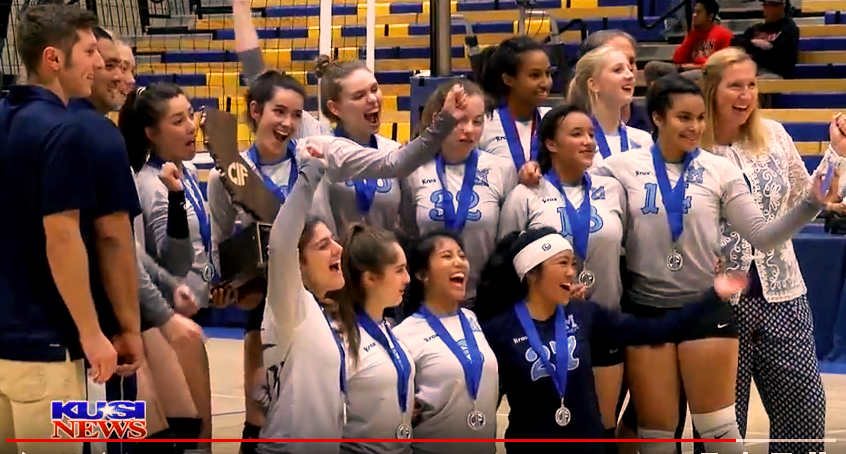 On Saturday, November 18, sophomore sensation Riley Burns ran an astounding race to win the Division V Championship at Morley Field. The win qualified Burns for the State V Championships (5.000 meters) which was held Saturday, November 25 in Fresno. As the sole runner carrying the torch for Maranatha, Riley finished an impressive 38th place out of 207 runners. We're incredibly proud of Riley and his remarkable accomplishment! 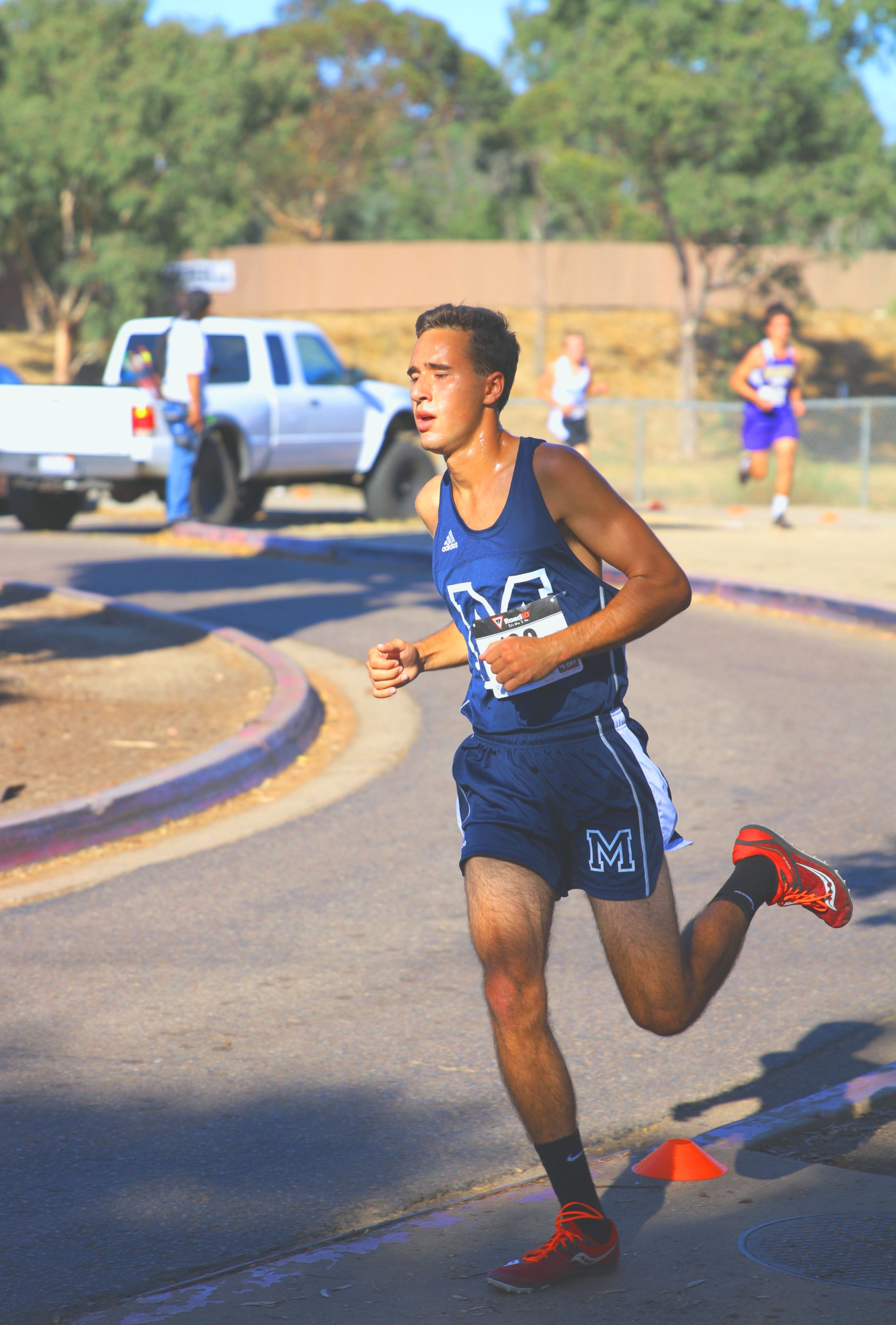 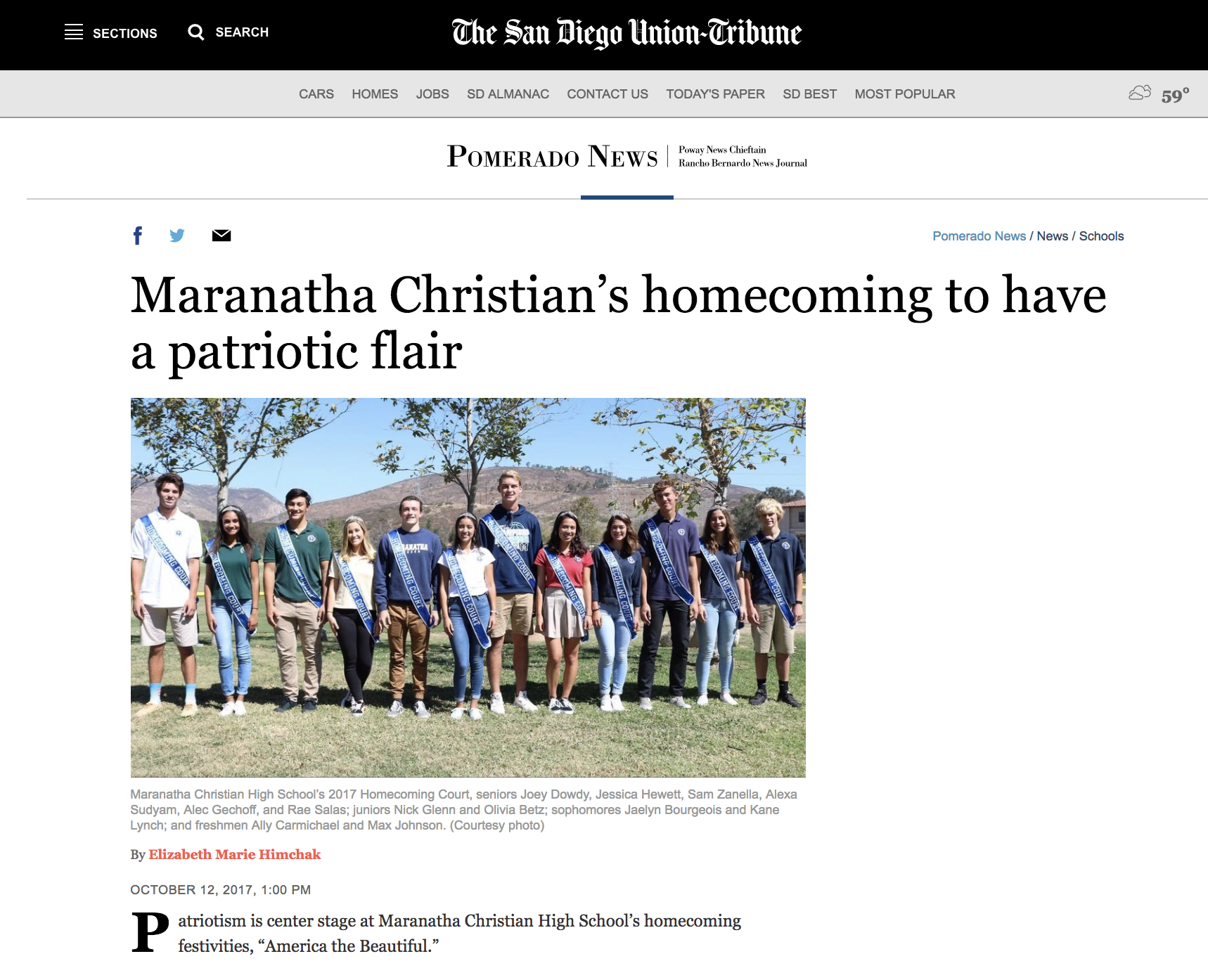 The most magical ticket on the planet is the one to Willy Wonka Jr., a musical stage adaptation of Charlie and the Chocolate Factory. Maranatha Christian School’s all-youth cast will delight families with comical Oompa-Loompas, wacky inventions and edible masterpieces. Families will enjoy  hearing cherished songs like ‘Pure Imagination’ and ‘The Candyman.’ This delicious production will take place November 10-12 at Maranatha Chapel. Show times:  Fri 7pm | Sat 11am | Sun 5pm & 8pm. Buy tickets online for $12 (children under 5 are free) at www.maranathachristianschools.org 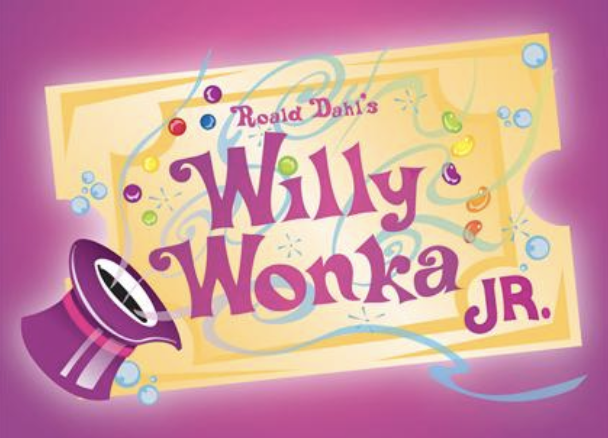 View our ad in the October Issue of FINE Magazine 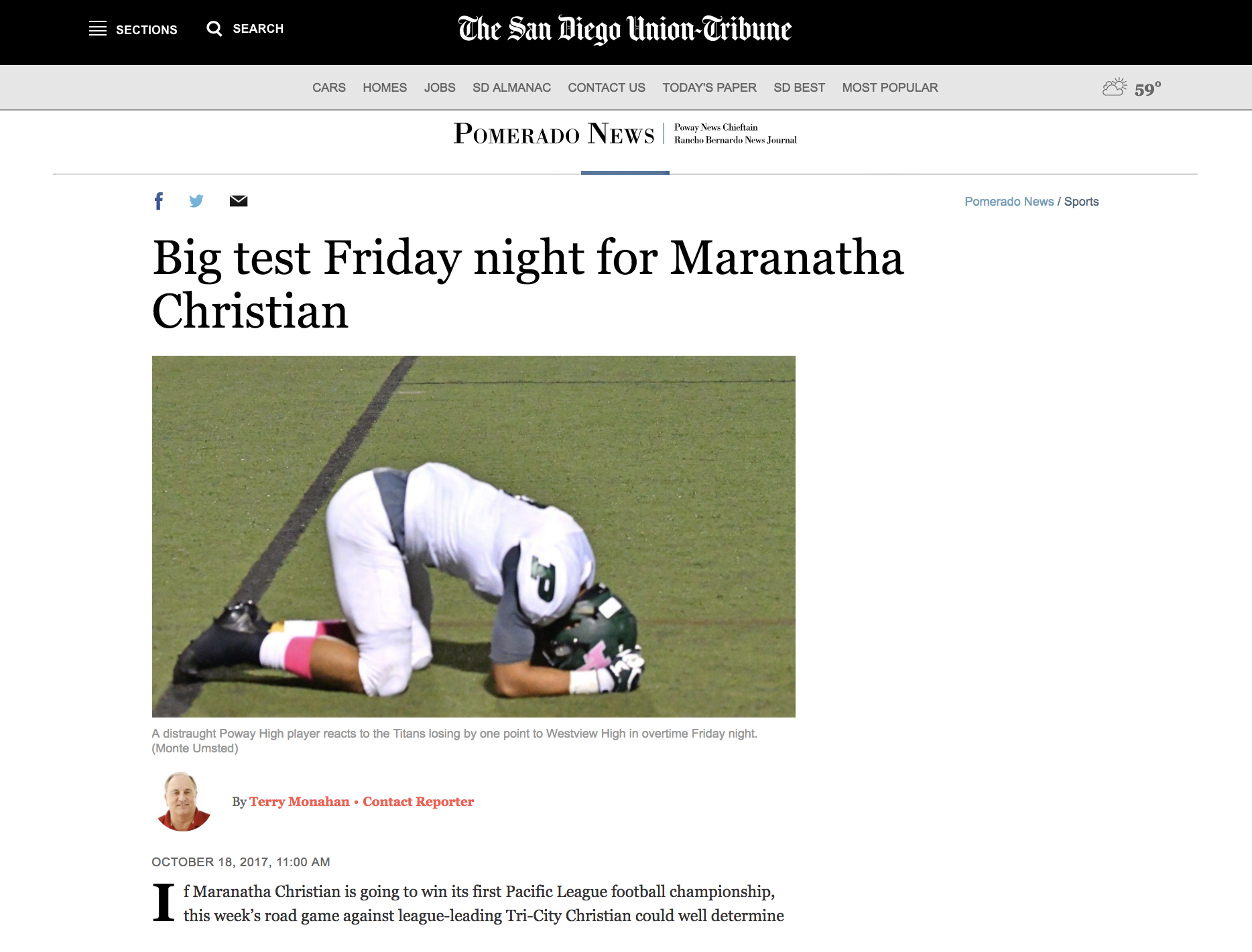